You are here: Home / Zero Hedge / It’s Not The Economy, Stupid – Trader Warns “It’s All About The Euro”

With the dollar set for its worst year in 32 years (and if that trend continues, a considerably bigger drop from here), the euro is at its strongest since January 2015 – to Draghi’s dismay – as no matter what the ‘economies’ either side of the Atlantic do, the trend remains your friend… for now. The big question, as former fund manager Richard Breslow notes is “So where do we go from here? Or, more properly, what can we use for signs?”

Do you think the euro goes home every night and is serenaded with a gusty version of “For He’s a Jolly Good Fellow”? Given how it’s been trading, it wouldn’t be a surprise or undeserved. There have been impulsive days higher and moments it looked under stress, yet ended up holding support. And not just against the beleaguered dollar but a virtual pantheon of other currency crosses deemed to measure its relative strength. It seems to be an appropriate song to mark the achievement because it too is shared by many countries not always on the same page. 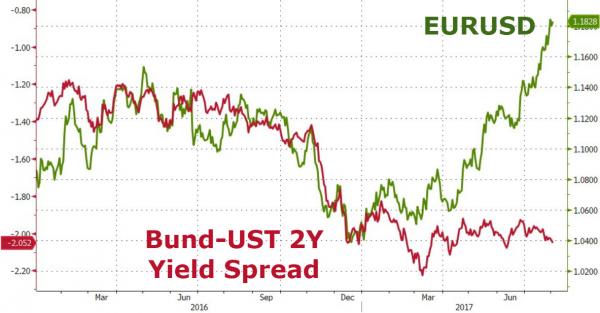 Currency markets love a good story. And, in some cases, like now, are willing to embrace one that looks like it could have a happy ending.

The euro zone economy is doing better. Political risk has lessened and they may be actually inching toward some form of taper. The fact that unemployment remains way too high, political risk deferred isn’t the same as eliminated, and they are nowhere near their inflation target is for later.

Foreign-exchange traders also have a strong affinity for round numbers. And reaching targets that become personal challenges. They’ve little concern for overshooting current fundamentals when they get the bit between their teeth, with no hesitation to extrapolate galore. It is, after all a game, and that’s what makes currency traders so lovable.

But they also adore the parlor trick of calling a turn. Especially if they’ve missed a move that can morph into a source of torment unless it has a serious pullback to let them in. Sounds familiar, doesn’t it? The difference is, FX traders tend to get bearish on dips and forget to buy it.

So where do we go from here? Or, more properly, what can we use for signs? One thing that’s characterized this entire move is it’s been equally impressive versus a broad number of other currencies. Don’t focus on only one cross.

And don’t over-analyze intra-day noise. Closes are the only things that matter. And it’s probably best to leave dailies to the day traders and use weekly and monthly charts which, given these moves, have much more detail to share. It’s a testimony to the scope of this sea change in the euro’s fortunes that the moving averages you need to use are like everything else in this environment; a search for duration. If you use weeklies, think 200- or 233-week moving averages. If monthlies, keep a close eye on the 55-MMA. Wow, who would have thought I’d be saying that looking back at Q1? 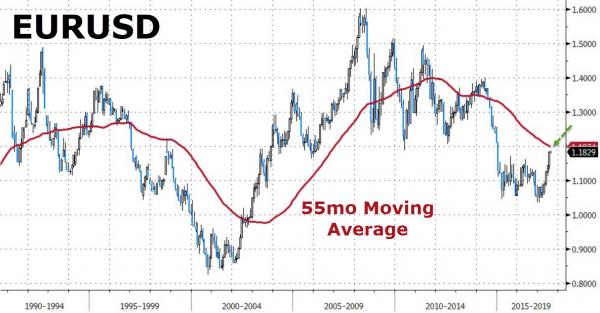 One conclusion you can’t avoid making is it’s in serious play – against everything.

It’s the beginning of the month and mid-week ahead of lots of news, so it’s problematic to make too much of one day’s price action. But you know traders will be gunning for that very remarkable 1.20 versus the dollar. It fits every requirement. 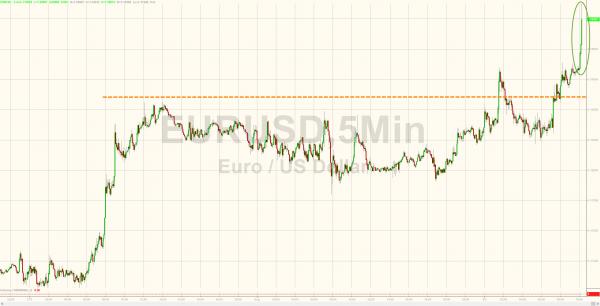 First, however, it will have to clear the hurdle, on a closing basis, of what could end up being a triple top near 1.1850. Versus the others, it has yet to do anything wrong.

The USD Index just plunged to a new cycle low… 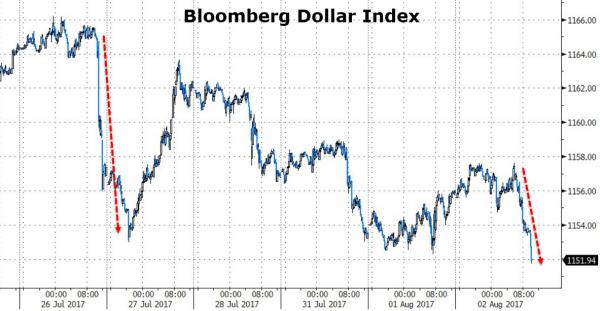