You are here: Home / Wake Up World / Huachuma – The Visionary Cactus from the Peruvian Andes
Print Friendly or Save as PDF 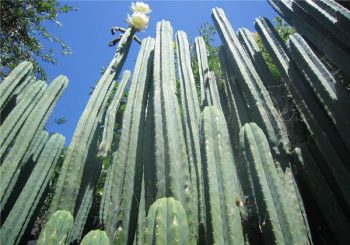 Huachuma is the original name given to the various mescaline-containing columnar cacti native to the Andes and used traditionally in Peru for millennia for healing and divination.

The cactus thrives at around 3000 meters ( 10,000 feet ) above the sea level and flowers between October and March with beautiful flowers gifting the lucky observer with a gentle scent. Its flower opens for just one day and closing over the next two days. After this the flower gradually dries out and forms a cocoon with new life-seeking seeds. Then it is the turn of the grown cocoon to dry out while releasing the seeds to the will of the wind. Thus the new life is begun.

The most commonly used botanical names are Echinopsis Pachanoi (spineless) and Echinopsis Peruviana (spiteful) but these names, of course, are only a shadow of the real essence of the plant, which is spiritual, not verbal. To realize this, it takes more than knowing the plant’s name. An experience is like a cloud which floats beyond the horizon of botanical study.

My introduction to this ancient mystery which begun in 2005, was nothing less than a life-changing event; a fact that has slowly revealed itself over time. Back then, I was a spiritual seeker, who intuitively knew that plant-medicine shamanism held the key to a kind of knowledge that could not be found in books. This type of knowledge was experiential, not intellectual. I was not satisfied with reading about the experience; I wanted the experience. Led by a burning desire and a spiritual thirst that up until then had resulted mainly in disappointment, I was fortunate to find people in Peru who had practiced shamanism for many decades, and were dedicated healers.

This new acquaintance and introduction to an ancient path became a new starting point in my life. My urge was calmed. My thirst was satisfied and spiritual hunger fed. A path of self-discovery ahead was now opened to me with a friendly and welcoming gesture. I kept coming back to work with the same people for three and a half years before I made the decision to move to Peru, which I did in April 2009, after feeling the call to serve the sacred medicine. This of course did not come without a price. I had to make a large payment for the pass. It wasn’t in terms of the money but in terms of the fear of death which was my unwelcome friend from an early childhood. My near-death experience in Mexico while working with Huichol Indians and the sacred Peyote is described in detail in my book. Shortly after that, I moved to Peru. Landing in the Sacred Valley in the Andes, felt like coming home. I knew I wanted to build my new life here around this sacred medicine.

Shamanism was something I had been drawn to since my early childhood. But living under the Soviet regime, this prospect did not look hopeful. Already as a kid I felt sharply the pain of separation from the sense of life being a miracle. And ‘growing up’ seemed to threaten this further. I didn’t want to grow up believing that life is a process of collecting stuff and saving for retirement. This prospect seemed rather too bleak.

Fearing death as a child, and seeking self-fulfillment from an early age were significant factors in the formation of my spiritual quest. This quest led me eventually to shamanism in Peru, where sacred medicinal plants were not only legal, but embedded in the culture, reaching back as far as the dawn of history.

“San Pedro” is the post-colonial name given to the psychoactive Andean cactus known under different names. ‘Huachuma’ is the old Qechua name, which means: ‘vision’ or ’that which makes one drunk’. It is a visionary cactus with an amazing potential for healing. Seeing the world through its “eyes”, is like being born again, but this time consciously. 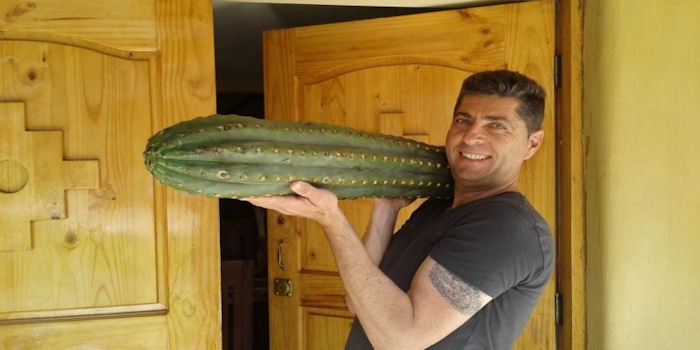 With the invasion of the Spaniards in the early 16th century, native shamanic traditions of Peru faced the very real threat of extinction. The brutal intolerance of the Catholic Church would only allow for obedience and conversion, and certainly not ‘paganism’ and ‘devil-worshipping’ practices, as they generally viewed them. How exactly some of these ancient traditions survived, nobody knows, but I have been entertaining the following thought as for potential possibility. There could have been a deal made. And this was simple – the natives could continue their use of their sacraments whilst worshiping Christian Saints. San Peter was an apostle who, according to the Christian theology, received the keys to Heaven from Jesus Christ. A visual representation of this biblical scenery can be found in the painting by Marco Zoppo from an early epoch of Renaissance (1468) which depicts the saint holding the Keys of Heaven.

Seeing the parallels between the heavenly experience of the San Pedro cactus and the apostolic story from the newly adopted faith, would naturally lead them to the choice of this name. Perhaps this allowance from the Church was made out of mercy or, as a favor seeking gesture in the eyes of God and the indigenous population.

In a similar way, the Qechua people during the Inca dynasty hid their mummies inside the wooden statues of Christian saints during the Corpus Christi feast – an annual liturgical solemnity and celebration of the body of Christ. Thus, while on the surface they worshiped the Christian saints, they were in fact, revering their own. 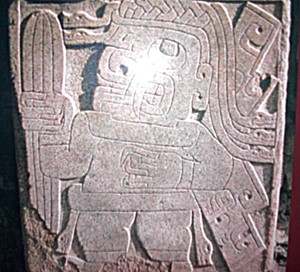 Another parallel can be drawn between the painting by Marco Zoppo entitled Saint Peter and an ancient carving which is found in the temple of Chavin de Huantar in Peru, an anthropomorphic image of a deity, half man half jaguar, who holds the sacred cactus in his hand as the key to the state of consciousness it represents. Being three millennia apart, same symbolism is quite apparent.

In any case, and regardless of theories, the tradition has survived until today, albeit of course, in a form of syncretic religion. And although the cloak of Christian terminology was pulled over its lungs, it hasn’t been suffocated, and remains breathing as the mountains around you when you see them under the influence of this sacred medicine.

Coming to this with my own spiritual baggage, which mainly comprised of reading eastern philosophies and contemplating upon them using psychedelics, was a good thing. I had a context and a ‘’fertile ground’’ in which the seeds of new teaching from the mescaline-containing cactus could spread its roots.

But even though my love for wisdom and a search for answers for life-long questions were my early allies, I have not suspected how deep the ‘jaguar hole,’ actually goes. I can still remember the excitement I felt when I realized that plant-based shamanism was ‘the real deal’ – an authentic path that actually works and is open to those who are willing to step beyond the fear of the unknown while being unsatisfied with the verbal description of the higher states of consciousness as it has been described by others.

The world that I’ve seen through the light of the sacred cactus was beyond belief. Its self-evident truth did not require one. Thus the shamanic perspective which is described as animism in the academic studies has simply become my new outlook. In essence, this is what shamanism actually means. Although it is a very broad name given to diverse practices of healing, in fact, it is a way of living and interacting with the world. Not all of them include the use of psychoactive plants. In Siberia for example, the invocation of ancestral spirits for the purpose of healing is achieved without using plants. For myself, however, this aspect of shamanism was not of such great interest. I was after an altered state of consciousness in which as I hoped, I could perceive the world in a different way, learning and spiritually growing from it directly and experientially. It is hard to describe the feeling when after a long search a person finds a path that is actually fulfilling. And this is what the sacred cactus means to me; an oasis full of spring water in the middle of a desert, drinking from which, one realizes that this is not a mirage.

My intention is not to make this article about myself, although I must present it that way to make it personal. Instead, it is a brief introduction to an ancient mystery which has been accompanying humanity from time immemorial, echoing through millennia while reaching out to the new hearts and minds.

Free from ideology and dogma, the ancient path remains intact and clearly drawn on the map of consciousness. The daily miracle of Nature, which gets neglected every day in life, is recognized and worshipped with tears of gratitude. The healing energy of sacred cactus drunk like nectar with the beak of our souls. A light greater than the light of the day is finally seen with the inner eyes and loved for its purity and beauty. Belonging to the greater unity becomes a fact of life, not a wishful experience. The denying of the physical world, which is somewhat needed at the early stages of spiritual path, in order to understand the difference, turns into acceptance and living is now seen as the service to the greater cause.

Well, simply put, knowing this reality brings happiness and joy of understanding. That’s really it. There are no more rewards I’m after. Waking up in the morning with a peaceful mind and gratitude for another day in my life is generous gift I am infinitely thankful for.

I think that each of us come to this world with this light, which then somehow vanishes under the sociocultural pressure we acquire during the later years. The loss of it causes fear and anxiety and eventually turns into depression, which is only a symptom of this separation from oneself. We feel alone and lonely. Separated from the source of life, when in fact, we are it, or at least, we are the leaves and flowers of the tree of life.

Reconnecting to our spiritual roots is “coming home”, not in a hyperspace or separate reality surrounded by other beings, but here and now, in our familiar, known space which becomes sacred the moment it is recognized as such. 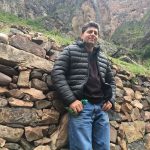 Sergey Baranov is the author of ‘PATH’, a book that will be of interest to any spiritual seeker who seeks honesty above all else. Living in various countries and growing up in different cultures, Sergey gained an understanding of the essential, a core commonality of human experience that lies beneath the differences to be found in every culture. By walking different paths and seeing through their limitations, Sergey found shamanism as a unifying path for all people regardless of their cultural background. He currently lives in Peru with his family where he conduct monthly San Pedro retreats.

You can find out more in his book “Path”, available here on Amazon, or follow Sergey on Facebook at Facebook.com/HuachumaWasi.