You are here: Home / Wake Up World / Hope for the World’s Oceans – Major New Study Provides Route Map to Recovery in Just 30 Years
Print Friendly or Save as PDF 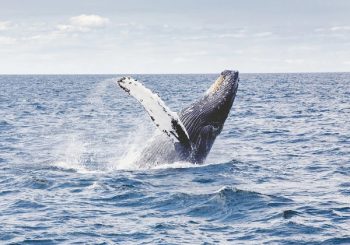 Of all the damage mankind has inflicted upon our earth, the depletion of marine life around the world has been some of the most heartbreaking – but a major new international study has set out a route map to recovery. If urgent action is taken, biodiversity in our oceans could be restored to healthy levels within just one generation, by 2050, researchers believe [1].

Using evidence from successful marine conversation projects around the world, researchers from four continents, ten countries and sixteen universities have been able to identify and narrow down the most crucial steps governments around the world must take if this narrow window of opportunity is to be taken [2]. Although threats from climate change and over-fishing are becoming ever more acute, the marine life losses we saw in the 20th century have to some extent slowed in the 21st century so far – and in some cases, remarkable success has been achieved. Take the global population of humpback whales, for example – a species which was on the brink of extinction in 1968, but which now numbers more than 40,000. Northern elephant seals are another example of what the report terms “impressive resilience” – numbering just 20 breeding animals in 1880, today there are more than 200,000 [3].

Such good news stories are important for individual species, but they’re also important for global marine management, provided that the lessons learned from them can be scaled up and applied quickly.

The new study states that marine life recovery can be accelerated by large scale interventions – to such an extent, if done well, that we may see substantial ocean life recovery within the next two-three decades. Researchers have identified broad themes necessary to support this recovery, such as the protection of species, wise harvesting, protected spaces, habitat restoration, pollution reduction and climate change mitigation. Each of these themes contains specific actions which should be brought to bear on nine integral elements of marine life, namely deep sea, megafauna, fisheries, oyster reefs, kelp, coral reefs, seagrass, mangroves and saltmarshes.

Researchers have laid out a careful road map towards recovery, including discussion of possible problems and remedial actions. However, as the authors point out, any such success in marine life recovery will depend upon global will, across national boundaries and diverse societies – not to mention a substantial financial commitment, in the region of $10-20 billion a year, the report estimates [3]. However, such an investment would be repaid many times over in the benefits from ecotourism, sustainable fishing and a reduction in storm damage where coastal areas are protected by marshes or mangroves. The report is also clear that this plan can only succeed if the most ambitious goals of the Paris Agreement on climate change are reached.

The study, published in Nature, states “Rebuilding marine life represents a doable Grand Challenge for humanity, an ethical obligation and a smart economic objective to achieve a sustainable future.” “We have a narrow window of opportunity to deliver a healthy ocean to our grandchildren’s generation,” said Dr Carlos Duarte, Professor of Marine Science and lead author of the study. “We have the knowledge and the tools to do so. Failing to embrace this challenge – and condemning our grandchildren to a broken ocean – is not an option.”

Nikki Harper is a spiritualist writer, astrologer, and editor for Wake Up World.