You are here: Home / The Daily Sheeple / Hobby Lobby to Pay $3 Million, Forfeit Thousands of Rare Artifacts Pilfered from Iraq 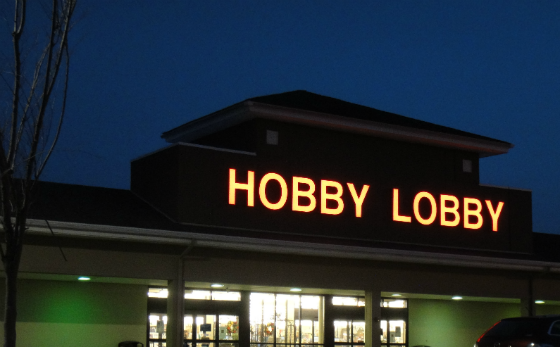 Hobby Lobby has now agreed to shell out $3 million and fork over thousands of illicit Iraqi artifacts the arts-and-crafts superstore spent years fighting to keep.

On Wednesday, federal prosecutors announced the settlement of a civil forfeiture action between the company and the Department of Justice — a longstanding dispute stemming from Hobby Lobby’s entrée into collection in 2009, of “historically significant manuscripts, antiquities and other cultural materials.”

According to the New York Times,

“Prosecutors said in the complaint that Hobby Lobby, whose evangelical Christian owners have long maintained an interest in the biblical Middle East, began in 2009 to assemble a collection of cultural artifacts from the Fertile Crescent.”

According to The Atlantic, Steve Green — Hobby Lobby president and member of the same Green family responsible for the debut of the Museum of the Bible in Washington D.C. this autumn — traveled to the UAE to inspect some 5,548 objects with the antiquities consultant, including “cuneiform tablets, which display writing used in ancient Mesopotamia, and clay bullae, or balls of clay printed with ancient seals.”

Despite their multiple millions in collective value, the complaint against the company states, the objects were casually strewn about, “spread on the floor, arranged in layers on a coffee table, and packed loosely in cardboard boxes, in many instances with little or no protective material between them.”

“Two Israeli dealers and one dealer from the UAE were present; the objects allegedly belonged to the family of a third Israeli dealer,” the Atlantic continues. “One of the Israeli dealers sent Hobby Lobby a statement of provenance, claiming that the objects were legally acquired through purchases made in the 1960s. It also named a custodian who purportedly, in the 1970s, took care of the objects while they were being stored in the United States.

“But that person never actually stored anything for the third Israeli dealer, the complaint alleges, and Hobby Lobby never contacted the custodian.”

Nevertheless, Hobby Lobby eagerly proceeded with the purchase in December 2010 — even though an expert acquired by the company warned against potential ramifications, stating,

“I would regard the acquisition of any artifact likely from Iraq … as carrying considerable risk.”

“An estimated 200-500,000 objects have been looted from archaeological sites in Iraq since the early 1990s; particularly popular on the market and likely to have been looted are cylinder seals, cuneiform tablets.”

But, it wasn’t as if the deal — despite having experts involved — bore the sterile hallmarks of one conceived within the bounds of the law.

Accounts for five individuals in seven separate banks split Hobby Lobby’s cool $1.6 million for the rare items, which were then shipped to the U.S. in nondescript, perhaps unforgivably insufficient, packages — marked only with the words, “Tiles (Sample).”

To avoid scrutiny and inspection by officials, the antiquities dealer fraudulently undervalued the shipments on custom forms — indicative of malfeasance, as the complaint states,

“The use of multiple shipping addresses for a single recipient is consistent with methods used by cultural property smugglers to avoid scrutiny by Customs.”

Beyond the agreed-upon payout and forfeiture of all the items, Hobby Lobby has officially “accepted responsibility for its past conduct,” agreed to train employees more rigorously, revise internal procedures, and will be required to submit reports on further acquisitions — but only for the next 18 months.

For its part, the company appears superficially apologetic for its transgressions, which, Green claims, came about purely through ignorance of the trade in antiquities business — an excuse ordinarily as flimsy in the eyes of the law as wet tissue paper.

“The company imprudently relied on dealers and shippers who, in hindsight, did not understand the correct way to document and ship these items,” Green lamented in a statement to the Hobby Lobby website, cited by the Atlantic.

That the Islamic State has reaped billions from the plunder and pillage of Iraq’s innumerable precious antiquities is now widely known — but, in part due to the timing of the Hobby Lobby deal, the company insists none of their illicit objects were ever linked to the terrorist group.