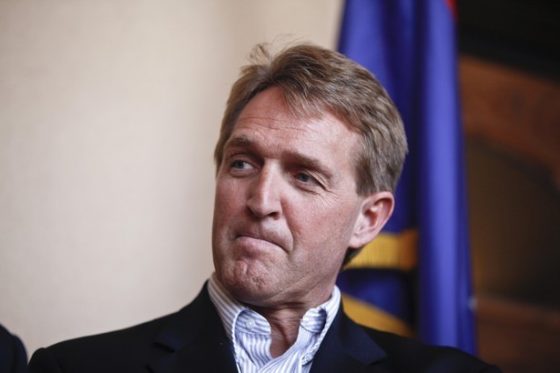 In a move transparently designed to protect both the corrupt mainstream media and their deep state masters, Republican Sen. Jeff Flake is planning to deliver a speech Wednesday in which he will ludicrously compare President Donald Trump to Joseph Stalin.

That’s right, a so-called conservative, who is in reality a globalist traitor, is set to compare the President of the United States to a mass murderer simply due to Trump’s rightful attacks on an establishment media that has openly declared war on him.

“When a figure in power reflexively calls any press that doesn’t suit him ‘fake news,’ it is that person who should be the figure of suspicion, not the press,” Flake will say, according to multiple media outlets who had a draft of his speech leaked to them in anticipation.

Keep in mind that it is an absolute FACT that 99% of the mainstream media is openly at war with the president each and every day. In return, Trump has rightfully labeled them the enemy of the people.

The sheer amount of hypocrisy it takes to compare Donald Trump to Stalin due to his attacks on the deep state controlled media when these same media outlets are openly working against Trump’s EVERY move is truly unbelievable.

In fact, the media watchdog group NewsBusters just released a new report that conclusively proves that the very media Flake is defending has straight up went to the war with the democratically elected president.

The first year of the Trump administration was as turbulent for the news media as it was for politics, with many journalists dropping any pretense of professionalism to become strident opponents of the President.

■ The Trump presidency was the biggest story of the year, accounting for one out of every three minutes of evening news airtime — nearly 100 hours in total.

■ The tone of coverage has been incessantly hostile, especially for a new President in his honeymoon year: 90% negative, vs. just 10% positive (These percentages do not include neutral statements).

■ More than two-fifths of evening news coverage of the President (43%) focused on controversies, not policies, with the Russia investigation alone accounting for one-fifth of all Trump coverage (1,234 minutes).

■ Despite their massive coverage of Russia, the networks had almost no airtime for questions about how the investigation began, or whether special counsel Robert Mueller’s current investigation is biased.

Amazingly, the fact that Flake is already openly working against a president from his own party is not good enough for the deep state puppets in the media who are now openly calling for Flake to literally drop his conservative principles altogether and straight up work with Democrats to obstruct Trump on the policy level.

A piece in the admittedly anti-Trump liberal outlet Slate lays out a series of suggestions for Jeff Flake which reads like a literal list of deep state demands that stand in stark contrast to what the American people actually voted for. Take notice that it also demands specific protections for the deep state lackeys in the DOJ and the FBI itself!

A small list of things they could demand, none of which are an affront to small-c conservative principles: a bill protecting Robert Mueller’s investigation; actual oversight of Trump’s business dealings and Emoluments Clause issues; a new look at the president’s power over nuclear weapons; promises from Trump to refrain from attacking ethnic and racial minorities and the media; promises from Trump to cease attacking the Justice Department’s integrity; ethics compliance among members of the executive branch; acceptance of 2016’s election results, and a promise to not try and restrict the franchise.

Yes, you read that right. The mainstream media is now demanding that the president cease criticizing them completely, that he totally ignore the Clinton operatives within the federal government and in fact move to protect them, and that his power over nuclear weapons be stripped.

Yet Trump and his supporters are ones that are similar to Joseph Stalin? Who in the hell does Jeff Flake think he is kidding?