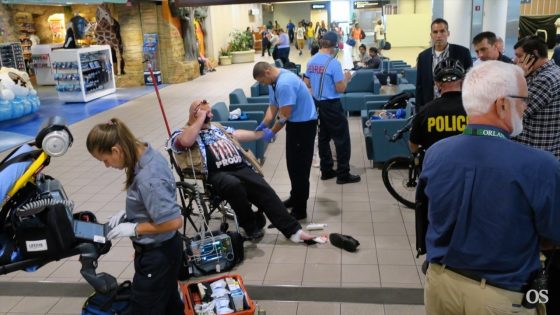 A federal agent injured his own foot Tuesday when he accidentally fired his gun. The little accident prompted quite a scare at Orlando International Airport.

Police said that the federal agent was an Immigration and Customs Enforcement agent flying for vacation from Kansas City. While he was attempting to unsling his shoulder bag at a checkpoint, the strap caught his holstered gun. As the gun began to fall, the agent tried to catch it, pulling the trigger in the process. The agent shot himself in the heel, and no one else was injured during his little stunt. He was taken to the hospital as a precaution after being treated at the scene in his “Proud” American t-shirt.

People at the airport took cover and were terrified when they heard the gunshot. George Robins was at the airport at 11:20 am dropping off his grandson when he heard a loud bang. “I heard a gunshot go off and I knew it was a gunshot. I started looking around right away for where it was at,” he said. He said his grandson and others ducked for cover.

Just got to @MCO Witness says a gun fell from a man and accidentally went off @WFTVpic.twitter.com/KKR9qNG6sJ

A traveler at the airport at the time, Tony Ricci, said he was only mere steps away from the gunfire. “I was standing about 10 feet away and all of a sudden I heard the gun go off,” he said. Ricci said he also saw the bullet. (It was probably actually the casing since the bullet went into the floor creating a hole.) “There are hundreds of people around. We looked about 6 feet away and the bullet was right there on the carpet,” he said. As a gun owner and military veteran, Robins wants to know why the gun’s safety wasn’t on if the agent was on vacation. “He could have hit anybody, or it could have happened on a plane and killed a lot of people,” Robins said.

The TSA allows federal agents to carry guns whenever they fly, even while on vacation. The federal agent was not identified.

The noticeable bullet hole in the floor was covered by a plant and the incident did not hinder airport operations.