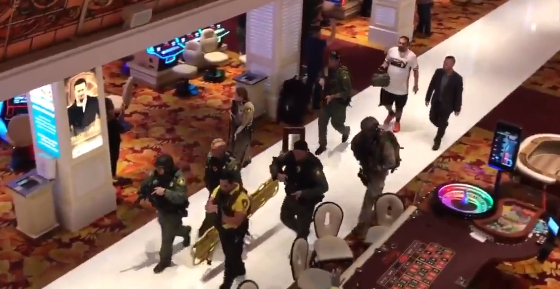 As bullets continued to rain down on the crowd of concertgoers at the Route 91 Harvest Music Festival, a seven man SWAT team, led by the FBI, was sent to the Tropicana Hotel to confiscate key video surveillance footage that recorded an unobstructed view of supposed shooter Stephen Paddock’s room, according to a bombshell new piece published by TruNews.

The incident in question was actually captured on a cell phone by Cerritos, California resident Jay Poloma, with the footage going viral immediately upon its release and leading many to believe that this was evidence of an attack at the Tropicana Hotel itself.

Interestingly, according to sources quoted by TruNews, the footage apparently didn’t show a team of law enforcement officers sweeping the hotel over fears of an active shooter, rather it literally caught authorities, as the actual attack was still taking place, storming a hotel to confiscate footage that could easily prove that their official story was complete nonsense.

The report claims that a law enforcement official told the news outlet that the team included an FBI officer as well as six LVMPD officers who were drafted at the last minute.

“According to a senior law enforcement official involved in the investigation, the seven man team was comprised of one FBI tactical officer, standing in the back left of the formation, and six officers from the Las Vegas Metropolitan Police Department who were drafted last minute for this impromptu raid,” the bombshell report reads.

“Their mission, according to the senior official, was to secure the video footage being captured from the Tropicana’s south facing external surveillance cameras, which were recording an unparalleled high definition view of the massacre from beginning to end.”

That’s right, as Stephen Paddock was still reportedly spraying into the crowd of horrified concertgoers, a tactical team was sent to a nearby hotel to immediately confiscate footage that could prove what actually happened.

This truly does have all the hallmarks of a classic deep state false flag operation.

Many who have seen the footage have wondered who the seemingly civilian like people are in the back of the tactical team while also questioning what one of the men was carrying. The TruNews report adds context to this as well.

“Regarding the two additional individuals seen in the back of the police formation in the Tropicana, the senior official confirmed they were employees of the hotel, and that the bag the man in shorts was carrying contained between $2.5 and $3 million in casino chips.”

This report also dovetails with another recent revelation that the FBI had deleted all videos and messages from the phones and laptops of numerous eyewitnesses.

“According to multiple reports, as well as additional sources cited by Infowars, people who worked at the Route 91 festival where the mass shooting took place have had their phones and laptops returned to them by the FBI only to find that ALL their videos and messages from the night of the horrific attack have been completely wiped clean,” reported The Daily Sheeple.

“A Facebook status update by a Las Vegas resident who worked the festival reads, “A bunch of people that worked the Route 91 said they got their cell phones back today. They all said that all their phones are completely wiped clean! All messages and info from that weekend are completely gone.”

Whether it be officials openly changing their “timeline” at least three different times, literally dozens of eyewitness reports that claim more than one shooter, or the muzzle flashes coming from helicopters over the scene, there remains an extraordinary amount of unanswered questions regarding the worst mass shooting in American history.

Amazingly, we can now apparently add the FBI leading an armed Swat Team through a nearby hotel to confiscate surveillance video to the list.