You are here: Home / The Daily Sheeple / Ex-NASA Scientist Claims UFOs Are Hiding In Saturn’s Rings 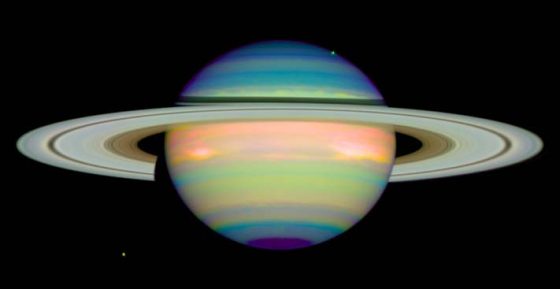 A former NASA engineer at the Ames Research Center claims aliens are in our solar system and they are creating the beautiful rings around the planet Saturn. Dr. Norman Bergrun claims UFO’s and alien spacecraft are hiding among the rings of not only Saturn but other ringed planets as well.

Dr. Bergrun is not joking or trolling either. He’s serious, and according to the mainstream media described “conspiracy theory channel,” SecureTeam10, which obtained Bergrun’s comments, the alien ships have been here for some time. “Alien spacecraft are proliferating in our solar system and around these ringed planets,” Bergrun is quoted as saying on the video. Bergrun also noted the alien aircraft are circling other ringed-planets in the solar system, including Jupiter and Uranus.

SecureTeam 10, which has nearly 900,000 YouTube subscribers, often runs similar alien conspiracy theory-based videos. The organization describes itself as the “source for reporting the best in new UFO sighting news, info on the space cover-up, and the strange activity happening on and off of our planet.”

The below video is 17 minutes long and can be viewed in its entirety.

This is not a new stance for Dr. Bergrun either. In 1986, the doctor wrote the book titled Ringmakers of Saturn. The book highlights that there are massive alien ships around Saturn (which Bergrun dubs “ring makers”), including alien spacecraft which have actually created some of the rings around the gas giant.

Bergrun’s stance has not faltered in the thirty years since writing his book. Could he be onto something? Or is he just another crazy conspiracy theorist?