Authored by Eric Peters via EricPetersAutos.com,

Mid-70s, United States. For no apparent reason, suddenly everyone seemed to be singing in a high-pitched falsetto voice and wearing skin-tight lycra with open collared shirts displaying chest hair and gold medallions.

It was fun for awhile but got old fast.

This will get old fast, too.

King Canute could decree that the tide not come back – and politicians can decree that we’ll all be driving electric cars by “x” year, not too far from now. But wishing – and decreeing – can’t overcome reality. It can just make things really expensive and difficult for us.

One reality almost no one seems willing to talk plainly about is the fact that hundreds of thousands of electric cars queuing up to spend 30-45 minutes each at a recharging port is as ludicrous in concept as waiting that long at McDonald’s to get a burger. Especially when there is a Wendy’s across the street that’ll get a burger in your hands and you back on the road in less than 5 minutes. 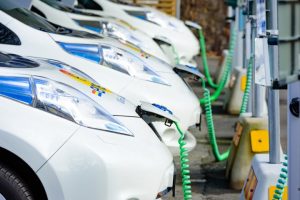 Most people will never accept this. Would you accept waiting 30-45 minutes (absolute best-case scenario, if a “fast” charger is available) to put a partial charge back into your EV? Were you aware that at the high-voltage “fast” chargers, due to the nature of the thing (and for the sake of battery life) you cannot put more than 80 percent charge back into the thing?

So, whatever the advertised best-case range of the car is, subtract 20 percent.

That puts even the longest-ranged of them in the same class as the fiercest-guzzling IC-engined SUV. Maybe 200 miles or so. But the fierce-guzzling SUV can be refueled to 100 percent in 5 minutes.

Which would you prefer to take on a road trip? One where there might not be a “fast” charger available when you run out of juice. What then?

Then, you spend overnight wherever you happen to be. 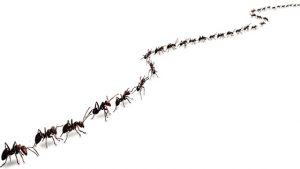 Electric car freaks peddle a Disney-esque fantasy to counter this objection. They envision everyone plugging in at home, overnight – or at work, while they work. The problem with this idea is the ant-like uniformity of use it assumes. Everyone going to work – and back home – at pretty much the same time.

A middling-bright eight-year-old would be raising his hand about now.

American driving patterns are scattershot. People are individuals and have individually variable schedules. They work odd hours. Part-time. They need to go Here – and then There.

On the spur of the moment, not planned in advance.

Have a look outside and see whether you see vacant streets during the hours in between 9 and 5. Then a sudden effusion of cars and people migrating homeward.

How about . . . traffic? It’s quite true that an electric car’s battery isn’t being drained to move the car when it’s not moving, as when it is stuck in traffic. But if you are running the AC (or the heater) and the lights you are drawing volts – and running the battery down. Keep in mind the best-case 30-45 minute wait to “fill ‘er up.”

The reality of EV World would be conga queues that would make the gas lines of the early ’70s (the result of oil embargoes, not lack of oil) seem like a minor irritation in comparison.

The Conga Effect would multiply, too – as (potentially) hundreds of thousands of EVs jockey for a slot at a charging port. Imagine a gas station, right now, with each EV taking a minimum of 30-45 minutes to finish its business. 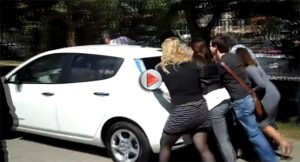 Leaving aside the economic absurdity of electric cars – the least expensive of them cost in excess of $30,000 (heavily subsidized, the true cost is much higher) which renders retarded any talk of “saving money” when you could buy a more functionally competent IC-powered car for half that sum – there is one non-negotiable technical/practical hurdle that must be overcome before EVs could conceivably replace IC-powered cars on a mass scale:

They must be able to get back on the road within 5 minutes. Even a 15 minute wait is unacceptable. Five minutes. No more.

Or – as a compensatory fix – an EV must be able to travel at least 600 miles before needing to be recharged.

Absent one or the other, the whole scheme is preposterous. Either that or deliberately calculated to be ruinous.

Which may well be exactly it. 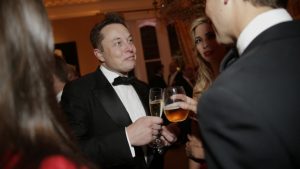 The people pushing electric cars are well aware of the realities discussed above and – their pie-in-the-sky assurances notwithstanding. By pushing cars that don’t work and which they know don’t work, they may be deliberately trying to recreate the world that existed before Henry Ford gave the world the Model T.

Which made cars affordable.

Before the T, cars were expensive extravagances, the toys of the rich.

From a certain point of view, affordable mobility is not desirable. That is to say, independent mobility. It is harder to control, encourages random and unpredictable patterns of human activity – the kind of activity loathed by the central planning, nudging technocrats who are (among other things) pushing electric cars.

The question is – will there be any push back?

And will it come in time?