You are here: Home / SHTF Plan / Earthquake In North Korea Was Less Than TWO MILES From The Nuclear Test Site 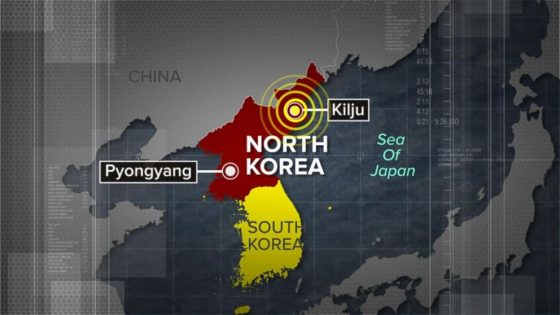 An earthquake struck North Korea less than two miles away from the reclusive nation’s nuclear test site. The regime’s continued pursuit of nuclear weapons is heightening tensions globally that are set to snap at any moment.

The 2.5-magnitude earthquake which shook North Korea early Saturday morning near its nuclear test site was initially picked up by Seoul’s weather agency. According to Newsweek, around 7:45 a.m. local time, the quake struck Kilju, a county in the North Hamgyeong Province, the Korea Meteorological Administration (KMA) reported. Kilju is located about 1.7 miles away from the Punggye-ri Nuclear Test Facility, where the country has conducted six nuclear tests since 2006.

Although the KMA believes that this quake was natural, North Korea’s nuclear test in September could have played a role. “Kilju is a rocky area where natural earthquakes normally do not occur. However, the quake could have been caused by geological changes created from the recent nuclear explosion,” a KMA official who asked not to be named, told the United Press Association.

Following the September 3 underground atomic explosion, a 6.3 magnitude quake rocked the test site and even shook houses in China, according to The Washington Post. The group 38 North—who closely tracks the country’s nuclear activity—believes the seismic activity is potentially a sign of “Tired Mountain Syndrome,” which is when the rock is altered as a result of detonated nuclear bombs. “What we are seeing from North Korea looks like some kind of stress in the ground,” Paul G. Richards, a seismologist at Columbia University’s Lamont-Doherty Earth Observatory, toldThe Washington Post. “In that part of the world, there were stresses in the ground, but the explosions have shaken them up.”

The earthquakes near North Korea’s nuclear test site also present even more disturbing implications. Chinese scientists have stated that more nuclear tests underneath Mount Mantap could cause the mountain to collapse. If that happens, radiation could be sent across the region, Wang Naiyan, former chairman of the China Nuclear Society and a senior researcher on China’s nuclear weapons program,warned.

North Korea’s most recent nuclear test also led to the death of at least200 people. They’re believed to have died after a tunnel collapsed about a week after the hydrogen bomb test. Nuclear explosions can cause any number of horrific tragedies, but North Korea seems dedicated to the advancement of their weapons program, despite repeated calls for them to cease developments.