You are here: Home / SHTF Plan / Does She Know Something That We Don’t? – Mike Pence “Is Planning An Inauguration” According To Maxine Waters 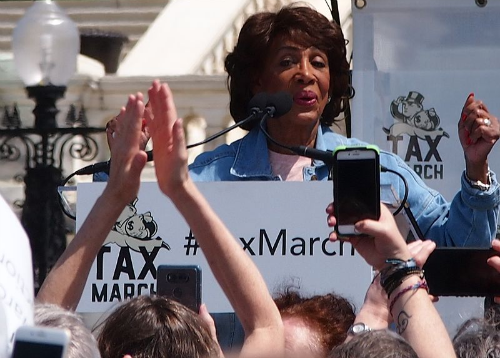 Whenever you hear an unsubstantiated claim, it’s usually wise to disregard it. In a world where you can listen to and read a near endless supply of news stories, you really only have time to pay attention to claims that are backed by evidence. The only exception to this rule, is when there are multiple claims from diverse sources, that are all saying the same thing. At that point you absolutely have to wonder if something is going on.

And that’s exactly what we’ve been seeing over the past week in regards to President Trump. There have been multiple claims that forces within our government are trying to overthrow him in some capacity. Evangelical Pastor Rodney Howard-Browne recently claimed that he spoke to a high level Republican Congressman, who told him that there was a plot to forcibly remove Trump from office.

“He said there is a plot on Capitol Hill to take the president out, I said you mean by impeachment or by indictment – he said no, to take him out, he will be removed suddenly from office,” said Howard-Browne, before adding, “you can read between the lines”.

Radio talk show host Rush Limbaugh has repeatedly claimed that both Republicans and Democrats are engaging in a silent coup against Trump, and more recently he said that he believes the deep state is recruiting ex military leadersto lead an overthrow of the Trump administration.

Several days before those claims surfaced, former CIA director John Brennan told CNN’s Wolf Blitzer that if the White House tries to fire Robert Mueller, then high ranking officials in our government should refuse to follow those orders. That’s not just an unsubstantiated claim. That’s practically a public admission that elements in our government wish to ignore the lawful authority of the White House.

As if that wasn’t alarming enough, Maxine Waters recently posted a tweet that by itself would sound kooky, but in the context of every other claim, should be taken very seriously.

…California Representative Maxine Waters, who has become an internet sensation among the left for her frank criticism of the president in recent months, tweeted Saturday: “Mike Pence is somewhere planning an inauguration. Priebus and Spicer will lead the transition.“

Her tweet comes after former chief of staff Reince Priebus resigned from office Friday, a week after Sean Spicer left his post as press secretary. The men, both longtime insiders among the top ranks of the national Republican party, had apparently quarreled with the White House over the direction it was taking.

Under different circumstances it would be easy to shrug off that comment, and chalk it up to the fact that Maxine Waters is known for making outrageous statements. But with all these other claims floating around you have to wonder, where did she get this notion from? Who told her that Mike Pence is planning to replace Trump?

And we should consider the possibility that someone within the deep state told her this. Though that statement is kind of odd and sounds like something she would make up, it’s also an awfully specific claim. It’s not characteristic of her typical nonsense.

And when so many people are all saying the same thing, you have to wonder if they’re also being made privy to a shadowy conspiracy by legitimate sources as well.

Report: “There Is A Plot On Capital Hill To Take The President Out… Will Be Suddenly Removed From Office”

Alex Jones Warns Of Trump Assassination Threat: “They’re Going To Blow Him And His Family Up… They Want Them All”

Rich Dad Poor Dad Robert Kiyosaki Warns Trump Of Deep State Takedown: “My Concern For My Friend The President… They Are Going To Find Something”