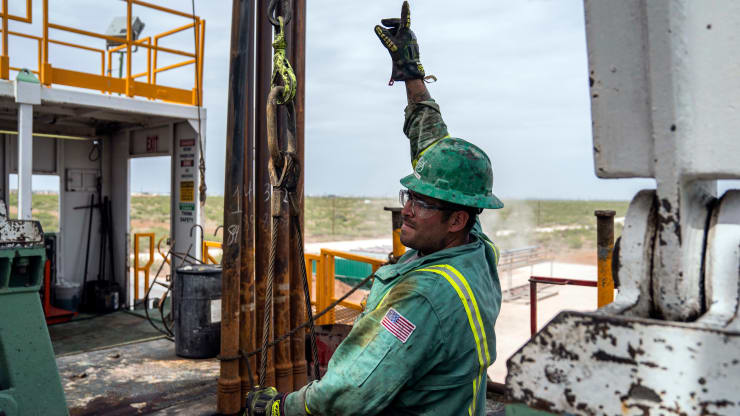 The volume of oil that Saudi Arabia will deliver to the US will be seven times the normal monthly supply rate to stay in storage facilities, the Wall Street Journal reported on April 17th.

Tankers were loaded at the height of the oil war and are still heading for the ports of Louisiana and Texas, as per the outlet.

The fleet of Saudi oil-filled tankers is slowly advancing toward the coast of the Gulf of America, threatening to exacerbate the excess of crude oil that has reached its peak in history. There are 40 million barrels of oil in 20 tankers; their arrival is expected in late May.

“This is Pearl Harbor for American oil producers. We know that the ships are arriving, and yet no one is doing anything about it,” an unnamed oil producer said.

The prices of crude oil are also dropping, with West Texas dropping more than Brent crude.

Oil plunged below $15 a barrel in New York, a fresh 21-year low, as inventories soar because of the supply-demand mismatch that’s been created by the coronavirus.

The most immediate West Texas Intermediate contract fell as much as 22% to $14.19 a barrel. While a major part of the slump is because the May futures contract expires on April 21st, the collapse reflects a fast-growing glut of oil, and rapidly expanding stockpiles in Cushing, Oklahoma, the American pricing hub.

WTI futures opened at a $9 discount for June, buyers in Texas are offering $2 a barrel for some streams.

In terms of prices it looks the following way: 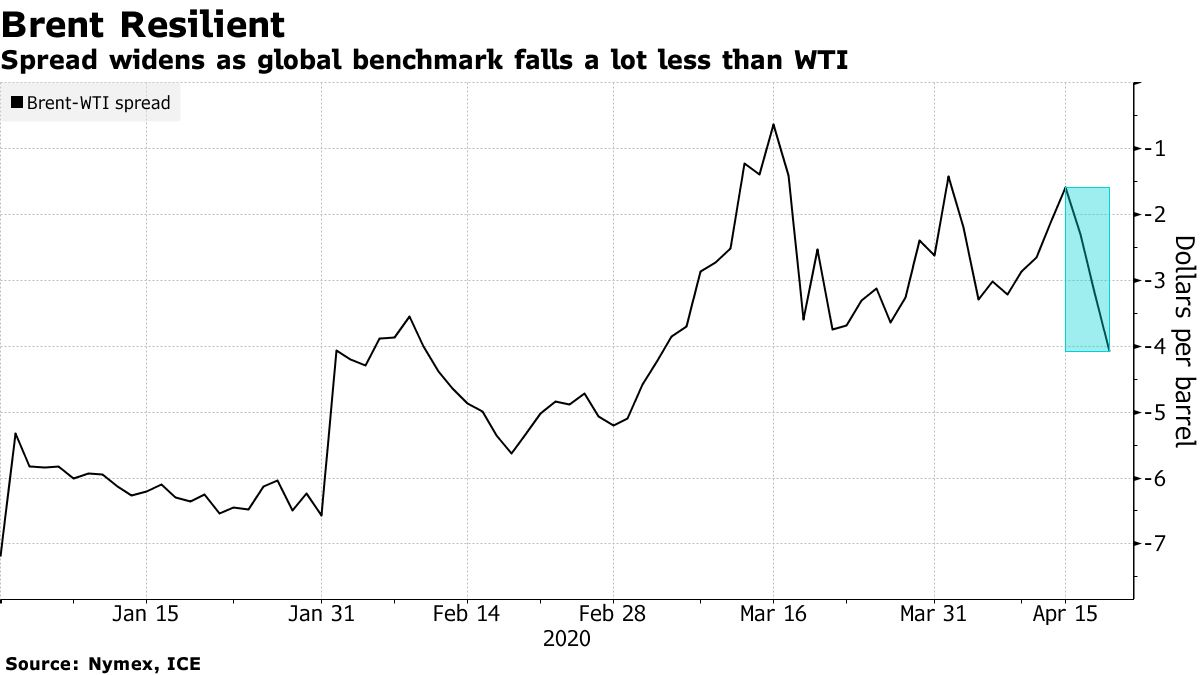 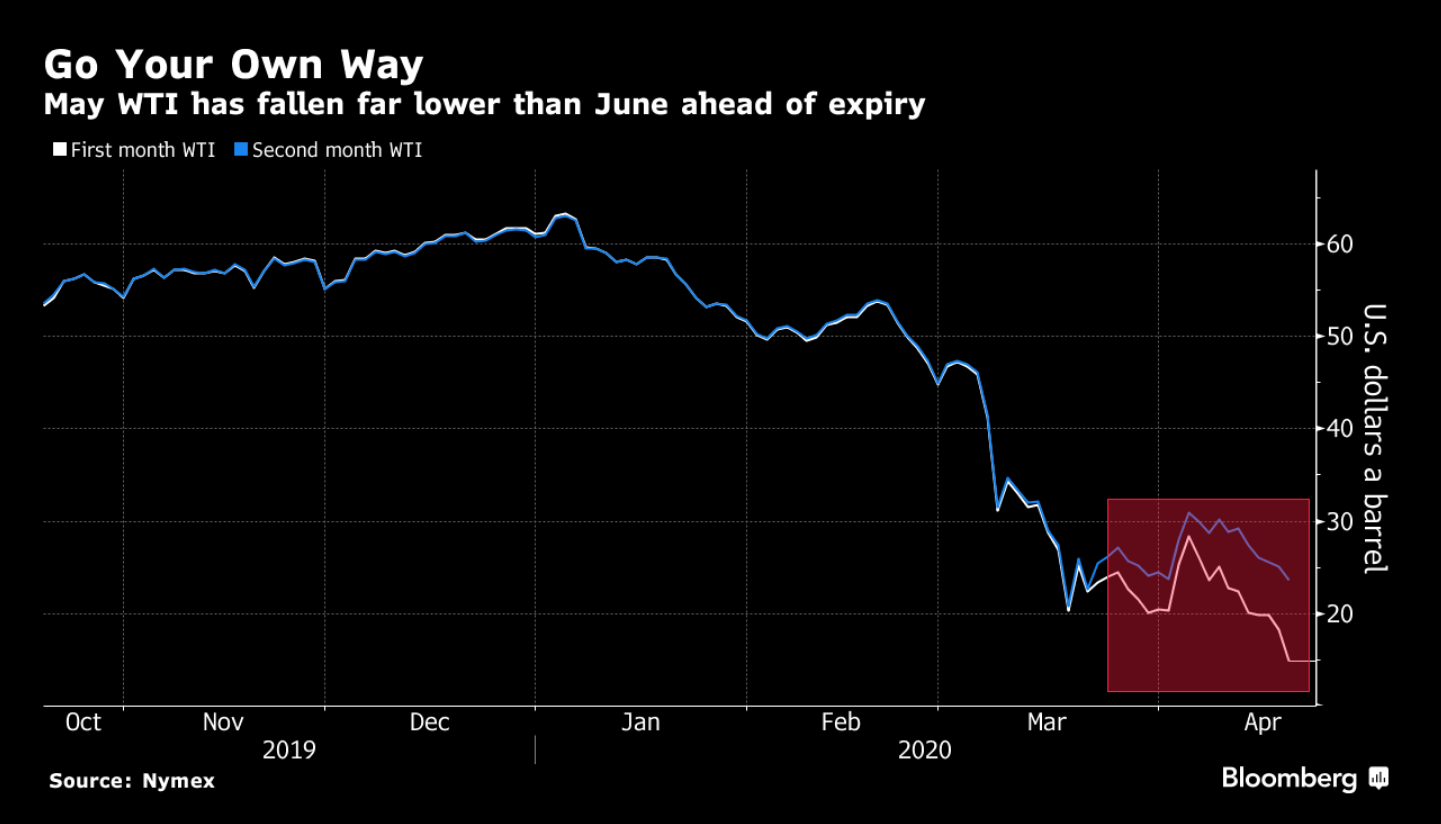 Meanwhile, three leading centers provided their forecasts for the situation in the oil market.

The International Energy Agency (IEA) expects oil demand to be 9.3 million bpd lower this year than last year. This is equivalent to a complete loss of demand in India and Africa. The IEA also predicts that in this quarter, the amount of lost demand will be equivalent to the total volume of demand in the US and Canada, which is 23 million bpd.

The Office of Energy Information and OPEC predicted that the annual drop in consumption will exceed the total amount of oil used in France, Germany, Italy, Spain, the UK and Japan.

The IEA believes that if the OPEC + deal comes into full force on May 1st, this figure will be 17.7 million bpd.

Based on these figures, wit can be concluded that even with the OPEC + transaction and the loss of an additional 4.5 million bpd of production outside OPEC, oil prices are still expected to fall further.

All three agencies expect the situation to improve in the second half of the year, or at least not look so bad.

Additionally, the US debt is also increasing. The debts of the US shale industry should inevitably lead to an increase in the US government debt and the collapse of the stock market.

The public debt of the United States and the debts of American corporations in 2020 reached a record four trillion dollars, which has not been seen since 1945.

ExxonMobil and Walgreens (the largest pharmacy chain in the US, annual turnover of about $100 billion) have spent their credit lines, but still need working capital.

There are only two ways out of the situation: either stopping payments on loans (partial default), or dismissing employees and reducing volumes, which would eventually lead to a total default.

According to estimates of the International Monetary Fund, US GDP will fall by 5.9% by the end of this year, ahead of a powerful quarterly collapse (JP Morgan estimates up to 40%).

There is only one way to repay fundamentally non-repayable state debts – by canceling one’s obligations (default). In historical practice, to write off such a level of debt, states have always used war as a way to revise all mutual obligations.

Thus, this relates to levels of debt unseen in modern history. A sort of point of no return is being approached.

US banks are already requiring citizens to pay off student loans and credit card debt. The US Federal Reserve lowered its key rate to zero and added $2 trillion to its portfolio. To put in perspective, $2 trillion were added in total over the four years after the Great Depression.

Currently, the US has no cause for worry, since the dollar is the global currency. But if and when India, China and Russia introduce their own forms of settlements, then that would be sufficient cause for worry.

At that point, the notion of defaulting on debt, and by way of a war to reset the global economy would be a legitimate and very real concern.