You are here: Home / End Of The American Dream / COVID-19 Has Become The (Second) Leading Cause Of Death In The United States
FacebookTwitterSubscribe 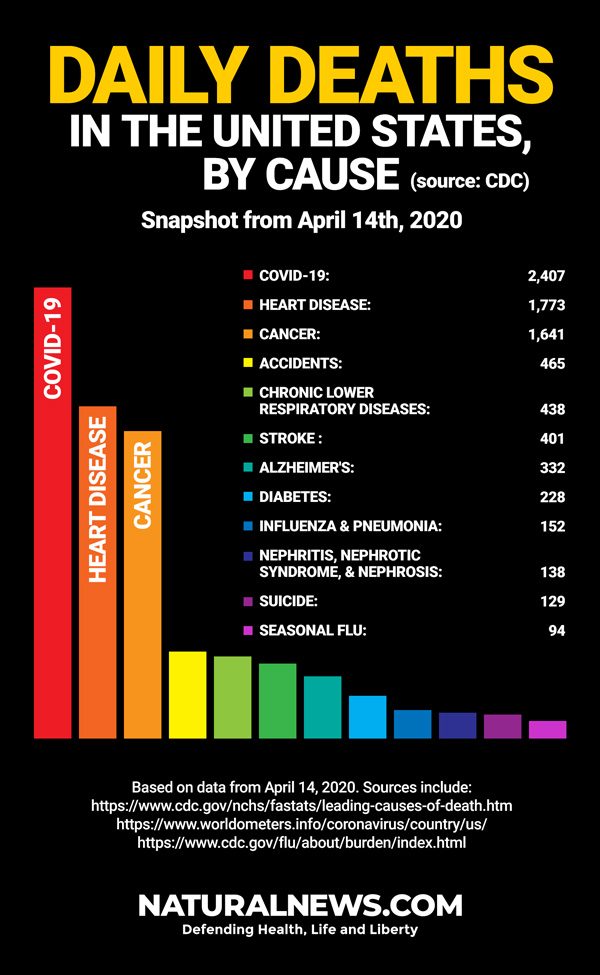 Despite all of the “shelter-in-place” orders that have been instituted all over the country, COVID-19 continues to kill an alarming number of Americans. If you visit the official CDC website, it will tell you that heart disease and cancer are the leading causes of death in the United States by a wide margin. But as Mike Adams of Natural News has pointed out, this week COVID-19 has actually been killing more people on a daily basis than heart disease and cancer normally do. In fact, on April 14th a staggering 2,407 coronavirus victims died in the United States, and that was more than 24 times higher than the average number of Americans that normally die from the flu each day.

But the good news is that the number of Americans dying from the coronavirus appears to be leveling off. Over the most recent 24 hour period, 2,174 coronavirus victims died in the U.S., but that would still keep COVID-19 at the top of the chart when it comes to leading causes of death.

However, there is one cause of death that the CDC never mentions. According to the Guttmacher Institute, 862,000 abortions were performed in the United States in 2017…

The report from the Guttmacher Institute, a research group that supports abortion rights, counted 862,000 abortions in the U.S. in 2017. That’s down from 926,000 tallied in the group’s previous report for 2014, and from just more than 1 million counted for 2011.

The Guttmacher Institute is a pro-abortion group, and other organizations believe that the true number of abortions each year is significantly higher, but for purposes of this article we will use their number.

So at this point, COVID-19 is just the second leading cause of death in the United States.

Overall, approximately 125,000 abortions are performed each day around the world.

Let that number sink in for a moment.

Over the course of this entire coronavirus pandemic, just over 145,000 people all over the globe have died, and much of the planet is currently shut down because this virus has created so much fear.

Authorities keep telling us that life will not “return to normal” until they can roll out a vaccine and inject it into all of us, and most projections currently put that somewhere in 2021.

But if the virus mutates, that could completely mess up their timeline. And according to one new study, a significant COVID-19 mutation has now been discovered in India…

A coronavirus strain isolated in India carried a mutation that could render current international vaccine efforts useless, researchers in Australia and Taiwan warned.

A vaccine that targets one version of a virus could potentially be utterly useless against another strain, and Fox News says that this new mutation could potentially throw the effort to produce a vaccine “off course”…

Scientists have been targeting the same process that allowed the severe acute respiratory syndrome (SARS) to infect people but the mutation found throws them off course.

The scientists claim that the change had occurred in part of the spike protein that allows the novel coronavirus to bind with certain human cells. The structure targets cells containing ACE2, an enzyme found in the outer surface cells in the lungs, which allowed the SARS virus to infect people, the South China Morning Post first reported.

This is huge news, but so far Fox News is the only major network that I have seen report on it. The following excerpt comes directly from this new study…

Monitoring the mutation dynamics of SARS-CoV-2 is critical for the development of effective approaches to contain the 21 pathogen. By analyzing 106 SARS-CoV-2 and 39 SARS genome sequences, we provided direct genetic evidence that 22 SARS-CoV-2 has a much lower mutation rate than SARS. Minimum Evolution phylogeny analysis revealed the putative original status of SARS-CoV-2 and the early-stage spread history. The discrepant phylogenies for the spike protein and it receptor binding domain proved a previously reported structural rearrangement prior to the emergence of SARS-CoV-2. Despite that, we found the spike glycoprotein of SARS-CoV-2 is particularly more conserved, we identified a mutation that leads to weaker receptor binding capability, which concerns a SARS-CoV-2 sample collected on 27th January 2020 from India. This represents the first report of a significant SARS-CoV-2 mutant, and raises the alarm that the ongoing vaccine Development may become futile in future epidemic if more mutations were identified.

Needless to say, Dr. Anthony Fauci and his minions are going to try to assure everyone that nothing has changed, but as Zero Hedge has pointed out, mutant strains of the virus could potentially force scientists “to start the vaccine clock from zero”…

Asked about the possibility of viral mutation during one of the White House’s inaugural task force press briefings, Dr. Fauci assured the public that scientists have found “no evidence” of any concerning mutations, though the prospect that a mutated version of the virus might return during next year’s flu season has kept some virologists up at night with nightmares about needing to start the vaccine clock from zero.

The problem is that vaccines often aren’t as effective against viruses that mutate, like the flu does every season (that’s why you need to keep getting that flu shot year after year). And now, a new scientific paper that – like most of the coronavirus research being cited in the press – has yet to be peer reviewed claims to have identified a mutation in a sample of the virus collected in India that could create serious problems for researchers working on a vaccine.

Of course there are millions upon millions of people that won’t take any vaccine that is produced no matter when it comes out.

On another front, there had been hope that chloroquine would be proven to be safe and effective for treating people that catch the virus, but a new study that was conducted in Brazil had to be stopped because the drug was so dangerous…

A double-blind research study of a drug touted by President Donald Trump early on to treat coronavirus found it to be so dangerous at high doses the trial was shut down after six days.

The study on chloroquine, conducted in Brazil, found one-quarter of the patients taking the anti-malaria medication developed potentially deadly changes in the electrical system regulating their heartbeats.

It has been known for a long time that chloroquine can cause major heart problems, and so this wasn’t too much of a surprise.

But it does appear that some good news is coming out of Israel. The following comes from Charisma…

An Israeli coronavirus drug that claims to have a 100% success rate among severely ill patients is being tested in the United States for the first time.

The trial comes after Pluristem Therapeutics Inc., a biotech company based in Haifa, reported last week that seven patients who were at a high risk of death due to respiratory failure survived after receiving the medication.

To me, this sounds very promising, and hopefully this treatment will prove to be both safe and effective after additional study.

But for now, COVID-19 continues to spread all over the globe, and the shutdowns that have been instituted to slow it down have crashed economies all over the planet.

The months ahead will be very challenging, and if this virus continues to mutate this pandemic could potentially stick around a lot longer than any of the experts originally envisioned.