You are here: Home / SHTF Plan / Cop to Other LEOs: “Stop Being Order Followers!” 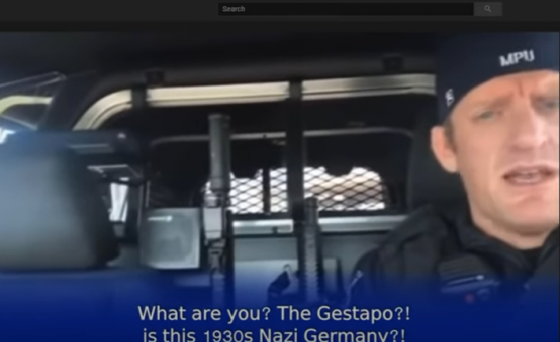 We have witnessed a slew of doctors coming out and saying we’re being lied to about this virus and the government’s response to it. Their response, by the way, was to exact tyranny on the globe and censor anyone who came forward. Now, we have cops FINALLY coming forward and telling other LEOs to stop being order followers!

David Icke said it best when he asked the military and law enforcement to look their children in the eye and tell them they enforced the tyranny those kids will be forced to live under when they get older. But now we have a cop who realizes that what is being done in immoral, wrong, and tyrannical.

Most cops have aligned themselves with tyranny and have not taken the side of liberty and freedom, and fundamental human rights and dignity. They have been just as power-hungry as the politicians whose orders they follow mindlessly. But we all need to thank this cop for speaking up and telling others to stop the tyrannical Gestapo bullshit. So again, thank you.

“We need to start looking at ourselves as officers and thinking ‘is what I’m doing right?’”

I can tell all cops right now that what you are doing is not right. It is not moral to arrest or harass peaceful people, regardless of the “law” or “legality.” Legality is not morality, in fact, what the Gestapo did for the Nazis was very much legal, but it was one of the least moral atrocities ever committed. And cops in the United States are doing the exact same thing right now, on American soil to the peaceful citizens trying to feed their families or enjoy a day in the sun at the beach.

“I want to remind you that regardless of where you stand on the coronavirus, we don’t have the authority to do those things to people just because a mayor or a governor tells you otherwise and I don’t care if it’s your sergeant or chief of police, we don’t get to violate people’s constitutional rights because somebody in our chain of command tells us otherwise.

No one has the right or the authority to violate anyone else’s rights ever, whether they’ve been commanded to or not. Politicians can bark orders all day, but it’s those who obey and use force and violence to “enforce” those commands that bear moral culpability for their crimes against humanity. We all have free will, and it sure would be nice if the cops stepped up their critical thinking skills and used theirs to actually help us beat back this tyrannical power grab instead of obeying. There are no orders if there are no order followers.

“We’re violating people’s rights and taking money from them or even worse, arresting them and depriving them of their freedom when they are exercising their constitutional rights!

What are you, the Gestapo? Is this 1930s Nazi Germany?

Our power as law enforcement officers is nothing more than a facade. “

And once people figure that out, and they’ve been pushed too far and backed into corners with no option but to fight back, they will. And they will remember who took their rights and liberty and freedom from them, and it wasn’t the guy giving the commands. It was the guy who followed those orders. Cops are no less or no more of a human being than the rest of us are.

“I’m afraid these actions are going to wake a sleeping giant, i.e., the American people.”

The cop is asking his fellow law enforcement officers to look themselves in the mirror and understand what they are doing to people. He understands that there is only so far you can push the public before they realize they outnumber cops 10,000 to 1. Those aren’t good odds, and it would be in all LEOs best interests to stop enforcing tyranny.

This ends when we say it does. When we stop following orders. As David Icke said, stop “acquiescing to the illusion of power.”