You are here: Home / Wake Up World / Coconut Oil May Reduce White Rice Calories 50-60%
Print Friendly or Save as PDF 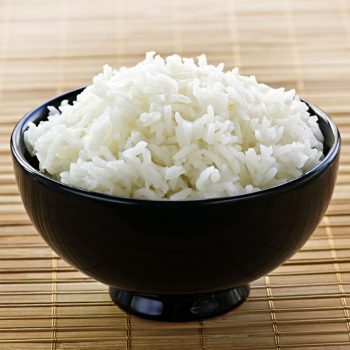 White rice is far from a health food, the excessive consumption of which contributes to overweight, obesity and blood sugar disorders, but research indicates adding coconut oil while cooking it can dramatically alter its nutritional structure and function.

The way that a food will affect your blood sugar depends on a wide range of factors.

For instance, you can’t just take a particular food’s glycemic rating in isolation, such as white rice, because it is invariably consumed with other ingredients and dishes. And some of them, containing fat or spices, may significantly reduce the effect a particular ingredient within a meal will have on your blood sugar.

White rice, of course, is emblematic of a highly processed grain, as it’s germ and bran have been removed, which constitute the bulk of its vitamins, minerals, essential fats and fiber. What you have remaining is essentially starch, which being comprised of a large number of glucose units, is a form of “hidden sugar.” It rates about 65 on the glycemic index, which compared to brown rice, is about 10 points higher. White sugar (sucrose), for perspective, is rated 68, and an apple 38.

Within certain schools of nutritional thought, it has long been held that if you mix certain fats with carbohydrate-rich, high glycemic starchy foods you will be able to reduce the blood sugar raising effect they have, yet little scientific research has been conducted to prove this.

What we did is cook the rice as you normally do, but when the water is boiling, before adding the raw rice, we added coconut oil—about 3 percent of the weight of the rice you’re going to cook. After it was ready, we let it cool in the refrigerator.

James’ supervisor, Dr. Pushparajah Thavarajah, pointed out in interview that this formulation renders the starch more resistant to digestion: “If you can reduce the digestible starch in something like steamed rice, you can reduce the calories. The impact could be huge.”

The researchers tested eight difference recipes on 38 different types of rice available in Sri Lanka, and when their cooking method was applied to the least healthful of varieties they produced a 10-12 percent reduction in calories. But they claim this is just the beginning and that a 50-60 percent reduction is possible using their method with more suitable varieties of rice which will be tested in the future.

A Washingtonpost.com report elaborates further on their findings:

James and Thavarajva tested eight different recipes on 38 different kinds of rice found in Sri Lanka. What they found is that by adding a lipid (coconut oil in this case, because it’s widely used in Sri Lanka) ahead of cooking the rice, and then cooling the rice immediately after it was done, they were able to drastically change its composition—and for the better.

“The oil interacts with the starch in rice and changes its architecture,” said James. “Chilling the rice then helps foster the conversion of starches. The result is a healthier serving, even when you heat it back up.

So far they have only measured the chemical outcome of the most effective cooking method for the least healthful of the 38 varieties. But that variety still produced a 10 to 12 percent reduction in calories. “With the better kind, we expect to reduce the calories by as much as 50 to 60 percent, said James.

One of the ‘tricks’ of this process is that the finished product must be refrigerated for 12 hours and served. The coconut oil, it was reported, “changed the structure of the rice molecularly in such a way that its starch turns healthier.” It was also observed that even when the chilled rice was re-heated, it still maintained its novel properties. James explained the chemistry behind this alteration: “Cooling for 12 hours will lead to formation of hydrogen bonds between the amylose molecules outside the rice grains which also turns it into a resistant starch.”

It should be noted that there are already a form of rice, known as parboiled or “converted rice,” which is both lower in calories and much lower on the glycemic index at 38. In the production of parboiled rice the vitamins and minerals from the husk are forced through steaming and being dried into the starchy and gelatinous granule. This retains approximately 80% as much of the nutrients as brown rice and also creates “prebiotic” fuel (type 3-resistant starch) for beneficial bacteria in the gut.[i]

With biotech corporations scrambling to alter the genetic code of food crops to accomplish similar results which can be patented, monetized and controlled, this research is a refreshing reminder that culinary innovations (some of them no doubt drawing from ancient tradition) may solve problems and enhance nutritional profiles in simple, do-it-yourself ways.

Sayer Ji is the founder of Greenmedinfo.com, a reviewer at the International Journal of Human Nutrition and Functional Medicine, Co-founder and CEO of Systome Biomed, Vice Chairman of the Board of the National Health Federation, and Steering Committee Member of the Global Non-GMO Foundation.

© 4th June GreenMedInfo LLC. This work is reproduced and distributed with the permission of GreenMedInfoLLC. Want to learn more from GreenMedInfo? Sign up for the newsletter here.