You are here: Home / Editor's Picks / Brandon Smith: The Next World War “Will Be Economic… Not Nuclear” 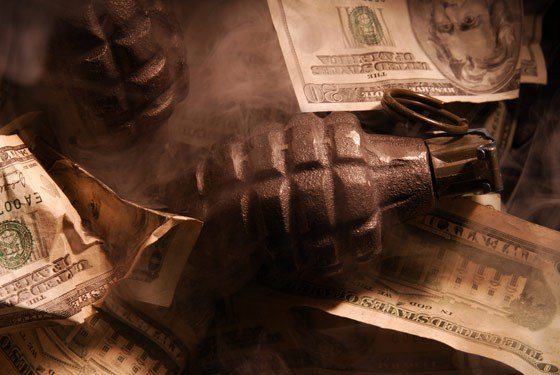 This article was written by Brandon Smith of Alt-Market.com and first published at PersonalLiberty.com.

Editor’s Comment: The elite appear to have a great deal in store for President Trump’s first four years… quite a few tricks up their sleeves, if you will. The wars are already being manifested; but the larger elements of financial upheaval may take years to play out, even if there are a number of chaotic events, a bit of panic, and more of the great squeeze that is sucking the vitality of the country dry.

Depending upon how things play out, people could end up better or than four years ago, or much, much worse. Theoretically, no one knows for sure which way that will go, but it appears that the global agenda is stilling rolling slowly forward, inch by inch, and about to take a big bit out of Syria, North Korea and beyond. Get ready for some big potential downturns.

The Real Dangers Behind The Syrian Crisis Are Economic

Back in 2010/2011 when I was still writing under the pen-name Giordano Bruno, I warned extensively about the dangers of any destabilization in the nation of Syria, long before the real troubles began. In an article titled Migration Of The Black Swans, I pointed out that due to Syria’s unique set of alliances and economic relationships the country was a “keystone” for disruption in the Middle East and that a “revolution” (or civil war) was imminent. Syria, I warned, represented the first domino in a chain of dominoes that could lead to widespread regional warfare and draw in major powers like the U.S. and Russia.

That said, my position has always been that the next “world war” would not be a nuclear war, but primarily an economic war. Meaning, I believed and still believe it is far more useful for establishment elites to use the East as a foil to bring down certain parts of the West with economic weapons, such as the dumping of the U.S. dollar. The chaos this would cause in global markets and the panic that would ensue among the general public would provide perfect cover for the introduction of what the globalists call the “great financial reset.” The term “reset” is essentially code for the total centralization of all fiscal and monetary management of the world’s economies under one institution, most likely the IMF. This would culminate in the destruction of the dollar’s world reserve status, its replacement being the IMF’s Special Drawing Rights basket currency system.

Eventually, the SDR basket system would act as a stepping stone towards a single global currency system, and its final form and function would probably be entirely digital. This would give the globalists TOTAL push-button control over even the smallest aspects of normal trade. The amount of power they would gain from a single centralized digital currency system would be endless.

Syria in itself is just one layer upon many in the process of deliberate global instability, but it seems to be vitally important to the elites given that they continually make new attempts to draw the American public into support for so called “regime change.”

Mainstream media publications like The New York Times overtly press the narrative that Syrian president Bashar al-Assad has a long history of war crimes including the use of chemical weapons against civilians. Yet, neither The New York Times nor anyone in government has produced a single piece of compelling concrete evidence that Assad is guilty of such acts, including the latest chemical attack which the Trump administration as used as a rational for cruise missile strikes against Syrian military targets and rhetoric calling for the ousting of Assad.

Not that I necessarily have much faith in the Assad regime, but we saw this same exact model used under the Obama administration in 2013: A chemical attack against civilians which the White House then immediately, without evidence, uses to implicate Assad and call for regime change. This tactic to seduce the American public into war fever failed, even with many acting serving military, and Obama backed away (in part) from a full blown invasion of Syria. Now, it would appear that the establishment hopes they’ll get a better response using the same con-game under Trump.

There are far more advantages in the Trump scenario, however.

It has been my longstanding belief since the middle of last year that Trump would undoubtedly be president of the U.S., because the international banking cabal needs a scapegoat for the ongoing economic crisis they have been engineering for many years. The Syrian strategy is a win/win for the elites under Trump because, with Trump, there is no need for moderation. If they can influence him to rampage without concern for the repercussions in the region, then their scapegoat implicates all conservatives in general with little effort on their part.

George Soros‘ prediction that Trump “will fail” because he is “unpredictable and unprepared” and that he will “end up bad for the markets” will become a self-fulfilling prophecy.

I warned the liberty movement over and over again after Trump’s cabinet selection that he was surrounding himself with establishment ghouls that would either run the White House in spite of him, or, that he was gladly cooperating with them. His recent high tension rhetoric against the Syrian government and against North Korea only seems to confirm my suspicions.

So, where is this all headed? Nowhere good…

First, consider the fact that every time it appears that the Syrian government seems to be making headway in destroying ISIS, there is suddenly another chemical attack which places Assad under suspicion. Anyone who read my article ISIS Is Being Aimed At The West By Globalists — Here’s What We Can Do About It, published in 2015, has seen the extensive evidence I outlined which shows U.S. government complicity and even direct aid in the creation of ISIS. I compared the rise of ISIS to Operation Gladio, a massive false flag project undertaken by U.S. and European governments in Europe from the 1950s to the 1990s.

ISIS is useful as a perpetual boogeyman, and sadly, the Muslim religion has one foot stuck in the dark ages and will remain fertile ground for generating extremist groups for decades to come. The elites have every intention of protecting certain factions of ISIS in Syria, which means that ISIS will continue to spread from the area into the EU and the U.S. and terrorist attacks will continue to multiply.

Second, we have learned that the Trump administration is perfectly willing to fast-track certain longstanding establishment projects that involve kinetic action (i.e. destruction and death). If they were happy to move so quickly to strike Syria without supplying any evidence to support the measure, then it should come as no surprise if they are willing to strike North Korea, a country with ACTUAL means to threaten American targets or our interests in the Pacific. A precedent is being set today for an ongoing program of fast moving preemptive strikes. I believe this will go even beyond Barack Obama’s notorious penchant for trigger pulling to destabilize regions.

Third, I think many people also forget that Syria continues to maintain a mutual defense pact with Iran. Why does this matter? Syria is NOT Libya; Assad is not going to go down like Gaddafi at the hands of insurgent groups like ISIS. Regime change in Syria is going to require numerous U.S. boots on the ground. This, in turn, will invite hundreds of thousands from the Iranian Guard to intercede. If you study military preparedness around the world you know that a country like Iran or North Korea will offer far greater resistance than what we saw in Afghanistan or Iraq.

While they are still very poor nations militarily (in terms of defense spending), they are still relatively well-trained, and the technology gap is less expansive. Many American men will die in such a fight. If ground invasion becomes an option in Syria, expect Iran to be next, and expect the option of a new “draft” to return to the U.S. Also keep in mind that Americans will never accept military conscription today unless we suffer a massive attack on U.S. soil, or on U.S. forces abroad. So, expect some shock and awe to occur in short order…

Third, there is, of course, the ongoing question as to when U.S. and Russian forces will “stumble” over each other and someone on either side gets killed? The majority of analysts in the liberty movement expect that this is inevitable. I suppose I agree, but I do not believe the elites have been entrenching billions of dollars in control grid technology in every major city in the world just to vaporize them in a chain of mushroom clouds (this control grid includes Russian cities — just look up Putin’s Yaroslavl laws, which might make the NSA envious).

It seems to me that the natural progression of these tensions will end in economic retaliation from the East against the West, not nuclear retaliation. The thing is, this is actually the worst case scenario.

With nuclear conflagration comes immediate loss of full spectrum awareness for the elites. They lose their surveillance grid, they lose the means to maintain a healthy standing military, they lose the means to dictate the narrative because the mainstream media will not be functioning at that point, etc. During an economic crisis, they can shift wealth easily to safe havens, they can weaken certain militaries while strengthening others. They retain their control grid apparatus and use it effectively against the citizenry as long as there is not substantial civilian resistance, and the list goes on.

With nuclear war there would be total chaos. With economic crisis there is controlled chaos. The establishment prefers the latter option.

Eastern nations and their allies still hold considerable U.S. Treasury bonds in their coffers, and they still use the dollar for the most part as the world reserve currency (though they have been preparing the ground for a dollar dump since at least 2008). On top of this, many of these nations also have the option of dumping the dollar as the petro-currency and crushing our monopoly on how oil is traded globally. If any of these measures are taken by countries like Russia, China and Saudi Arabia, the U.S. economic structure will lose the last pillar holding it above water. We will effectively move into third-world status in the course of a few years.

These are not hypothetical dangers, these are very real dangers which have already been mentioned publicly by Eastern interests in their own media. They are also dangers which SERVE the globalist agenda in the long run. As I have noted time and time again in the past with ample evidence, Eastern governments including Russia and China openly and avidly support the International Monetary Fund and continue to call for the IMF to take over global management of all monetary policy to form a single world currency system. They may be “anti-U.S.” in rhetoric, but they are NOT anti-globalist.

Syria remains a highly useful catalyst for the globalists to achieve the crisis they need to push their great reset forward. Being that they have tried to thrust Americans into that quagmire so many times over the past few years, I think it is safe to say they plan to use Syria as trigger point whether we cooperate or not.

This article was written by Brandon Smith of Alt-Market.com and first published at PersonalLiberty.com.