You are here: Home / Zero Hedge / Bernie Sanders Slams “Terrorism-Funding” Saudi Arabia, “Not An Ally” Of The US

According to Bernie Sanders, Saudi Arabia has “funded terrorism” around the world and is “not an ally of the United States.” 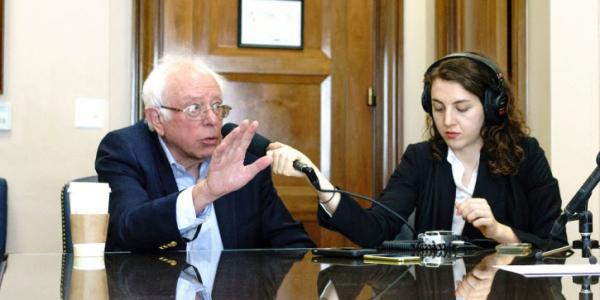 Bernie Sanders broke with the bipartisan consensus on Capitol Hill in an exclusive interview with The Intercept.

The United States has long considered Saudi Arabia to be a loyal friend, supporter, and partner in the so-called war on terror.

Sanders issued a scathing denunciation of the Gulf kingdom, which has recently embarked on a new round of domestic repression.

“I consider [Saudi Arabia] to be an undemocratic country that has supported terrorism around the world, it has funded terrorism… They are not an ally of the United States.”

The Vermont senator accused the “incredibly anti-democratic” Saudis of “continuing to fund madrasas” and spreading “an extremely radical Wahhabi doctrine in many countries around the world.”

“They are fomenting a lot of hatred,” he added.

Speaking to The Intercept, Sanders called for a “rethink, in terms of American foreign policy … vis-a-vis Iran and Saudi Arabia.”

The senator suggested the United States should consider a pivot toward long-standing adversary Iran and away from traditional ally Saudi Arabia.

[Saudi Arabia] “has played a very bad role internationally, but we have sided with them time and time and time again, and yet Iran, which just held elections, Iran, whose young people really want to reach out to the West, we are… continuing to put them down.”

To read the rest of the article, click here.