You are here: Home / SHTF Plan / “Battle Lines Are Being Drawn” – Could Saudi-Qatar Spat Spiral Into Another World War? 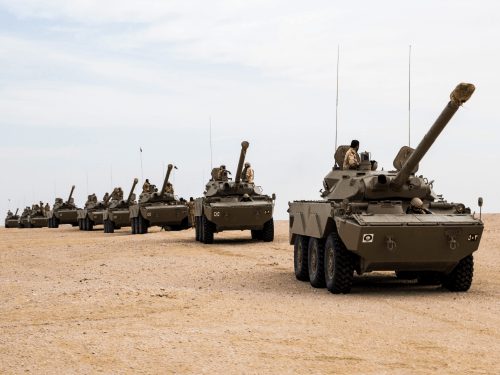 It’s been nearly a month since Saudi Arabia issued an ultimatum to Qatar, demanding that the Gulf state cut ties with Iran, shut down Al-Jazeera, and perhaps most hypocritically, the Saudi’s demanded that Qatar stop aiding terrorist groups. When Qatar refused to comply with the ultimatum, Saudi Arabia and the UAE placed an embargo on the country, and tried to blockade Qatar’s air, land, and sea borders. Qatar is still refusing to comply with the ultimatum, and the blockade is still in place.

For now this ongoing Middle Eastern spat has been largely ignored by the media, which shouldn’t be the case. Given the tumultuous history of this region, no conflict there should go unnoticed. Perhaps the media is too busy hyperventilating about the president’s provocative memes to report on a brewing war in the Middle East.

And that’s exactly what it is. The conflict between Saudi Arabia (and many of that nation’s allies) and Qatar could easily spiral into an Arab on Arab war. By some accounts, it could even set another world war in motion.

That’s also the opinion of Gefira, which is a financial analysis group from Europe. They see many eerie parallels between what’s going on the Middle East now, and the world wars that devastated Europe in the 20th century.

Just like the two world wars in Europe were triggered by a single event, so can long standing, unresolved rivalries for power and influence over the Middle East result in the mother of all wars.

Qatar and Saudi Arabia have collaborated in the recent years to overthrow the Assad presidency in Syria and replace it with a Sunni Muslim leader that would allow the creation of a pipeline from Qatar to Europe, for the benefit of the Gulf countries.

The failure of the American-Saudi-Qatari coalition however re-opened old wounds. In the recent weeks, the Saudi-led bloc, including Jordan, Egypt and Bahrain has broken all ties with Qatar, accusing it of working with terrorist groups and having too close ties with Iran. Since then, having cashed in on the support of US President Trump, Saudis have given a list of 13 demands to Qatar, which the latter has no intention to comply with.

In the meanwhile, very much like WW1 preparations, the game of alliances has started: Qatar, having lost the protection of the Arab world, sought it elsewhere, and found in Turkey.

As for now the Iranian bloc, Iran itself, Iraq and Syria, is standing on the sidelines, and watching the developments.

The crisis in Qatar has essentially triggered the rise of several alliance blocs in the Middle East, who are competing for dominance in the region. And that competition could soon turn bloody, as it often does in the Middle East.

Saudis, who have quickly amassed enormous wealth thanks to oil revenues, are now ambitiously and aggressively trying to assert their dominance over their neighours. Battle lines are being drawn: Turkey and Qatar on one side, Saudi Arabia, Egypt, Jordan and Bahrain on another and the Shia bloc of Iran, Iraq and Syria for a three-way dance that might have been ignited by the Qatari-Saudi rift.

Over a thousand of years ethnic and religious rivalries are readying to culminate in what, thanks to technological development, could easily be the bloodiest chapter of them all.

Of course, this new conflict is emerging while the US and Russia are still battling it out with their proxy forces in Syria, and many of these nations are either Russian or American allies. If the situation in Qatar blows up, it may not be long before the rest of the world is dragged into the fray.

The Trigger: If This Ever Happens You Know You’re Days Away From Nuclear War

Seven Places Where WW3 Could Start At Any Time: “Your Best Chance At Survival Rests In Your Ability To See It Coming”

Is Another War Brewing In The Middle East?: Saudi Arabia Gives 24 Hour Ultimatum To Qatar