You are here: Home / SouthFront / A New Frustrated Chapter in the Violent War Against Venezuela 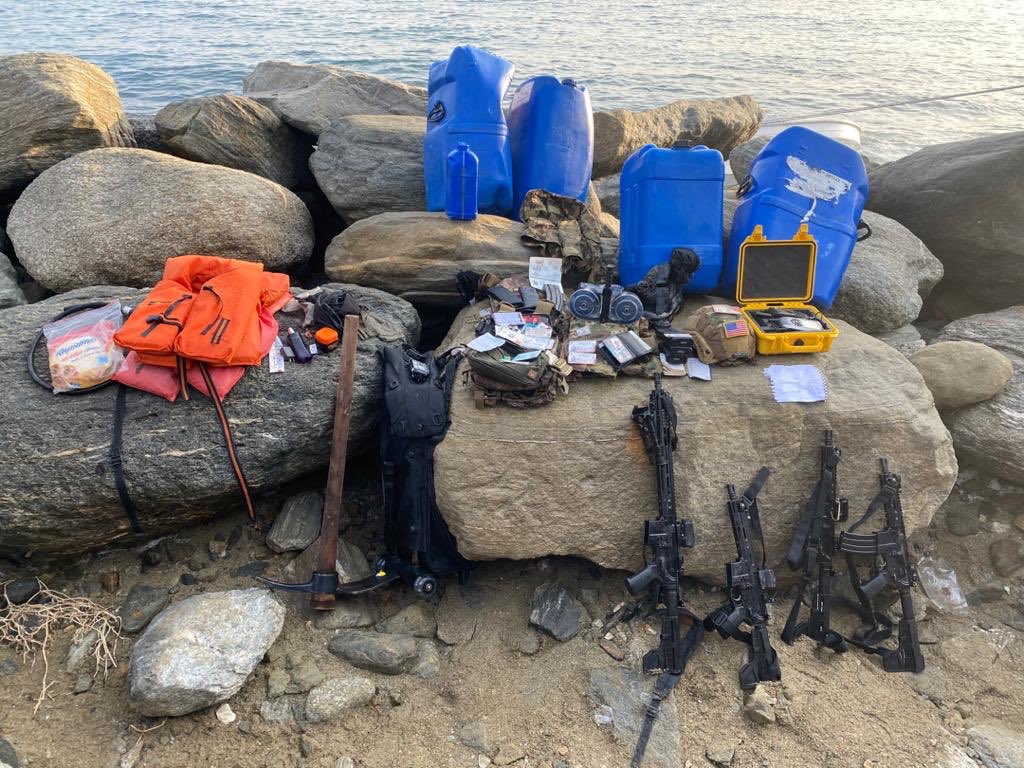 In the early morning of May 3, there was a thwarted mercenary raid on the coast of Macuto, in the state of La Guaira. Interior, Justice, and Peace Minister Néstor Reverol reported that the Bolivarian National Armed Force (FANB) together with the Special Action Forces (FAES) of the Bolivarian National Police countered an invasion by “sea” on the coast by non-state actors, officially called “Operation Negro Primero”.

The Venezuelan authorities reportedly killed nine mercenaries and detained two others, who were part of what they called “Operation Gideon”.

They also seized 10 rifles, a Glock 9mm pistol, two AFAG machine guns that were part of the Federal Legislative Palace’s weapons park stolen by seditious groups on 30 April 2019, six land vehicles in the form of pickup trucks, a boat with two outboard motors, two notebooks with details of the violent operation, satellite phones, identification, uniforms (including a helmet with the United States flag) and cartridges of various calibers.

Among those killed was former Captain Robert Colina, alias “Panther,” who had recorded a video that went out on Twitter this morning that called for “liberating” Venezuela. A few weeks ago, the Venezuelan fugitive from justice, now detained in the United States, Clíver Alcalá, admitted that he was one of his “trusted” men.

Last March, a defector from the FANB captured by local authorities, Rubén Darío Fernández (alias “Búho”), confessed that the aforementioned “Panther” was leading a terrorist squad to carry out selective assassinations against the main leaders of the national executive.

Reverol affirmed that this frustrated incursion came from Colombia; since Riohacha, Clíver Alcalá had been organizing a plot that was also dismantled last March, in which a cache of combat weapons that would be moved via illegal routes to Venezuelan territory was intercepted and seized by the Colombian police.

At that time, the Minister of Communication and Information, Jorge Rodriguez, said that these weapons were going to be received by “one of the three groups” coordinated by Alcalá.

In addition, a recently published Associated Press (AP) story claims that a military contractor, Silvercorp, which has received at least a couple of contracts from the US government, was in charge of training mercenaries and FANB deserters from the Alcalá group in three camps in Colombia.

Shortly before noon today, May 3, the president of the National Constituent Assembly, Diosdado Cabello, confirmed in a press conference that the maritime vehicles used in the operation came from Colombia because of the GPS information from the satellite phones seized in the operation.

The remains of a shipwreck

Minister Reverol reported “that the operation is continuing and other arrests are not ruled out as a thorough search is being made by land, sea, and air.

Cabello repeated this to the press at the Federal Legislative Palace, adding that one of the subjects arrested in the early hours of the morning confessed to being a drug trafficker, an agent of the DEA, the United States’ anti-drug agency, and added: “It is sad that those who call themselves Venezuelans are financed by drug trafficking, by drug money”.

What is certain is that some of the weapons and electronic equipment seized in this operation coincide with the models used in last year’s incident, on April 30, 2019, when some defectors from the FANB and mercenaries took over the Altamira distribution center in Caracas in a failed attempt to overthrow the government of President Nicolás Maduro in order to place Juan Guaidó, the man chosen by Donald Trump’s administration, in power.

Among the weapon models that match both scenes is a rifle that does not correspond to those used by the Venezuelan state defense and security forces.

Likewise, a Motorola XPR3500 radio seized in Macuto matches the model confiscated by the Colombian police in La Guajira last March, as well as the AR-15 rifles and the helmet with the American flag, equipment that was to be used by “one of the three groups” that Alcalá Cordones coordinated to carry out armed actions against Venezuelan institutions and leadership.

In addition, a source close to the official operation carried out by the FANB and the FAES in Macuto confirmed to Mision Verdad, under condition of anonymity, that the maritime vehicles set sail from La Guajira in Colombia and made a stop in Aruba before running aground on the Venezuelan coast.

Aruba, along with Bonaire and Curaçao, is part of the Dutch crown colonies in the West Indies. Curaçao is located 25 kilometers off the northwest coast of Venezuela, and the Netherlands decided last year to recognize Guaidó as “president” for the geopolitical benefit of the United States.

Both Aruba and Curaçao are territorial headquarters of two U.S. bases, respectively Reina Beatriz and Hato Rey, from where the Southern Command coordinates an Advanced Operations Center (FOL), spearheading its alleged anti-drug operations.

It should be noted that the cruise ship Resolute rammed a Venezuelan Coast Guard vessel, the Naiguatá, on March 30 near La Tortuga Island (in the absence of a request for permission), and subsequently fled to the port of Willemstad, in Curaçao. The head of the FANB’s Strategic Operational Command (CEOFANB), Admiral in Chief Remigio Ceballos, stated in mid-April that the Resolute was aimed at “placing mercenaries” in Venezuela.

The evidence (the participation of alias “Pantera”, the seized equipment and the stop in Aruba before arriving in La Guaira) indicates that “Operation Gideon” is indeed part of the plot coordinated by Clíver Alcalá from Colombia with resources, financing, and logistics from the United States (via a private security contractor) and with the approval of the clique led by Juan Guaidó.

The frustrated incursions were anticipated by the Venezuelan state through an aggregation of information. Diosdado Cabello said at the aforementioned press conference that such an action was expected on the country’s Caribbean coasts.

Since the calls for insurrection by Óscar Pérez and former Captain Juan Carlos Caguaripano in 2017 and the attempted assassination by means of drone bombs against President Maduro in 2018, the terrorist-mercenary agenda has been increasing in its coordination and attempts at implementation under different channels and actors.

This is how Venezuelan state agencies have been managing to dismantle this agenda, in which the most visible face in recent months has been Clíver Alcalá Cordones himself. Minister Jorge Rodriguez informed the country last March that there was a detailed follow-up to the plans that emerged from what was being plotted in Colombia.

Recently, on April 20, four captains and one lieutenant of the Bolivarian National Guard (GNB) were arrested and charged before military courts for weapons theft at GNB detachment 441 in Puerta Morocha, Miranda state.

Before being arrested, and according to the opposition, these officers tried to take over the weapons park and proceed to the Ramo Verde detention center in Caracas, freeing other seditious officers held there and arming them for a “military uprising”.

According to information from anti-Chávez journalist Luis Gonzalo Pérez of NTN24, the “uprising” “was going to be amphibious, both in La Guaira and in Falcón”, and the detainees “had conversations with external advisers in order to be able to carry out their armed uprising”.

As a preventive measure, the Venezuelan state decided to block the accesses to the Caracas-La Guaira highway and the Cabrera tunnel based on the information provided (whether from Colombia or from the recently arrested and prosecuted military). This action was opposed by opposition journalists and Iván Simonovis, former commissary of the then Technical Judicial Police, head of Security in the Caracas Mayor’s Office at the time of the Puente Llaguno massacre in 2002 and now a US collaborator in an attempt to crystallize a coup d’état against the Bolivarian Government.

Clearly the Venezuelan authorities have anticipated such an agenda within this critical context of the advent of the Covid-19 pandemic, in which the state is responsible for most of the official health care efforts for the population. The planners of the plot intended to exploit this “opportunity” to undermine the government of Nicolás Maduro, while the state neutralizes every attempt to impose a framework of violence, chaos and coup d’état leveraged again by the United States.