You are here: Home / The Economic Collapse Blog / A ‘Biblical’ Plague Of Locusts Has Put Millions On The Brink Of Famine: “We Have Never, Ever Seen What We Have In The Last Six Months”
ShareTweetSubscribe 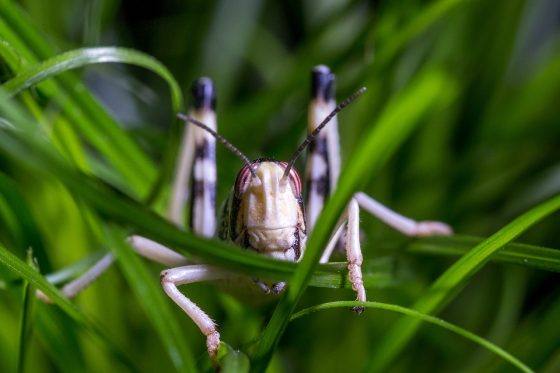 Billions upon billions of voracious desert locusts are ravenously devouring crops over a vast portion of the globe that stretches from eastern Africa all the way to India. This unprecedented plague was supposed to be subsiding by now, but instead a fourth generation of locusts has emerged that is producing swarms that are “up to 8,000 times larger” than what we witnessed earlier this year. Some of these swarms are the size of major cities, they can travel up to 150 kilometers a day, and when they descend upon a farm they can literally eat everything there in as little as 30 seconds. Because these swarms are not affecting the United States, most Americans don’t understand the immense devastation that is happening on the other side of the globe right now. The UN is warning that mass starvation is coming, and we are being told that it is going to begin by the end of this calendar year.

Each desert locust is very small, but collectively they can consume vast amounts of food. According to the UN, a swarm that contains between 40 and 80 million locusts can eat “the same amount of food in a day as three million people”.

And it is important to remember that colossal swarms of locusts have been destroying countless farms day after day for many months. What we have already witnessed is enough to constitute a major global emergency, and now the International Rescue Committee is telling us that this latest generation of locusts is the worst of them all by far…

“A fourth generation of desert locusts up to 8,000 times larger than previous swarms could destroy crops at the start of the hunger season and leave millions facing food insecurity and famine,” explained the aid organization in a statement.

When these swarms of locusts approach an area, they can be so thick that they literally block out the sun. Authorities have been spraying them with pesticides from the sky, but when you are talking about countless millions of locusts in a single swarm, killing thousands of them doesn’t exactly make too much of a dent.

In past articles about these locusts, I have focused on the widespread destruction that we have been witnessing in Africa, and without a doubt we will see widespread famine across much of the eastern portion of that continent.

This new generation is hitting Africa again, but what has surprised many experts is how hard it is also hitting Pakistan and India.

A British news source is using the term “biblical” to describe the infestation that Pakistan is facing, and the Pakistani government was recently forced to declare a national emergency because of the locusts…

Tens of millions of people are set to face food shortages on the continent after a plague of locusts embarked on a path of destruction across India and Pakistan. In Pakistan, a national emergency has been declared after an outbreak of locusts’, on a biblical scale, wreaked havoc across farmland in the eastern Punjab, southern Sindh and southwestern Baluchistan provinces.

Over in India, one expert is saying that these locusts are unlike anything that his nation has ever seen before…

Bhagirath Choudhary, director of the New Delhi-based South Asia Biotechnology Centre, an agriculture think-tank said: “We have never, ever seen what we have in the last six months in India – never in the history.”

Sadly, most Americans don’t even know that this is happening.

Here in the United States, the mainstream media has been so focused on COVID-19 and all of the civil unrest that has erupted, but this gigantic locust plague should be making front page headlines too.

At this point, things have gotten so bad that the executive director of the UN World Food Program is warning that we are facing “the worst humanitarian crisis since World War Two”, and he has publicly stated that hundreds of thousands of people will soon be starving to death every day…

“If we can’t reach these people with the life-saving assistance they need, our analysis shows that 300,000 people could starve to death every single day over a three-month period”, he upheld. “This does not include the increase of starvation due to COVID-19”.

Thankfully, we are not facing imminent starvation here in the United States.

But that doesn’t mean that everything is okay.

In fact, one brand new survey has found that an increasing number of Americans are skipping meals or reducing the size of their meals now that economic conditions have greatly deteriorated…

“One in four Americans (26%) say they or a member of their household have skipped meals or relied on charity or government food programs since February, including 14% who say they have reduced the size of meals or skipped meals because there wasn’t enough money for food, 13% who have visited a food bank or pantry for meals, and 13% who have applied for or received SNAP benefits,” the survey said.

Many Americans have been taking last Friday’s jobs report as a sign that things will soon turn around, but it turns out that the report was not nearly as rosy as many thought.

In the report, the BLS actually admits that a major “misclassification error” severely skewed the numbers and that the real rate of unemployment is actually about 16.3 percent…

When the U.S. government’s official jobs report for May came out on Friday, it included a note at the bottom saying there had been a major “error” indicating that the unemployment rate likely should be higher than the widely reported 13.3 percent rate.

And according to John Williams of shadowstats.com, if honest numbers were being used and if the numbers were corrected for BLS errors, the real rate of unemployment in the U.S. would currently be sitting at 36.5 percent.

So no, things are not good at all.

But at least locusts are not eating all of our crops and our population is not on the brink of starvation.

We should be thankful for the blessings that we still have, and we should use the time that we have to prepare for what else is ahead, because the truth is that this “perfect storm” is just getting started.