A major, M5.7 earthquake has struck off the coast of Northern California, just days after a devastating M7.1 quake hit Mexico, resulting in hundreds dead and at least 50 buildings collapsed. 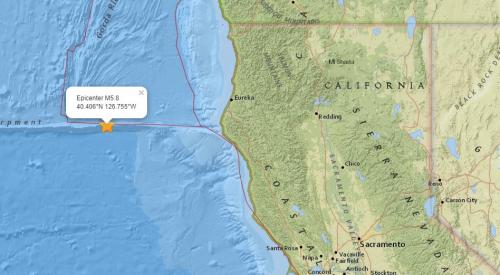 While the quake was luckily too far offshore to cause any damage, the Sacramento Bee writes that after Tuesday’s devastating earthquake in Mexico and the following smaller quakes that shook parts of California, “the West Coast is bracing for the worst.”

Time spoke to experts who pointed out that Southern California, Los Angeles and San Francisco were the most at-risk areas in the country for the next destructive quake. It’s been 160 years since the magnitude 7.9 earthquake near the San Andreas Fault, meaning a lot of pressure has built up over the years.

The Bee writes that multiple smaller earthquakes have been reported throughout the state as Mexico continues to recover and rescue victims from Tuesday’s disaster, and today’s “larger” quake appears to have been a culmination of the Mexico aftermath. A number of earthquakes were reported in the Bay Area on Wednesday, including one measuring magnitude 2.5 near San Jose, according to NBC Bay Area.

Still, John Bellini, a geophysicist with the U.S. Geological Survey, told SFGate the smaller quakes don’t necessarily mean the “big one” is in the near future. “It looks like normal activity,” Bellini said. “They’re all over the place. It’s not unusual.”

“We can’t predict or forecast earthquakes,” Bellini said. “Sometimes before a large earthquake you’ll have a foreshock or two. But we don’t know they’re foreshocks until the big one happens.”

Which, of course, is why California residents have been especially on edge in recent days.